“Wild is the music of the autumnal winds amongst the faded woods.” – William Wordsworth

What is the Autumn Equinox?

The autumn equinox falls this year on September 22. During the equinox, day and night are nearly equal in length, as the sun passes through the celestial equator. Here in the Northern Hemisphere, we’ll begin to notice the days growing shorter and the nights growing longer, the leaves on trees beginning to change, and temperatures growing colder. In the Southern Hemisphere, the sun’s transit brings the Vernal Equinox, when winter ends and spring begins.

In the astral realm, this is an ideal time to reconcile opposites and find balance. Equal lengths of night and day bring stability, and we can use this celestial equality to restore balance in our own lives and energy: light and dark, masculine and feminine, life and death (literal and symbolic), and so on.

The physical world experiences this shift as a transition from lush, green life to the dying back and harvesting of crops. For many of us, we may experience sadness that the abundance of spring and summer are coming to an end, but the equinox reminds us that the Earth needs rest, and She will soon bloom again with life at the start of spring. We can use this time to reap what we’ve sown during the warmer months, both physically and spiritually. This is a time for gratitude and reflection.

In the Celtic, Wiccan, and Pagan traditions, the autumn equinox, also called Mabon, is the second harvest festival in the Wheel of the Year (the first is Lughnasadh/Lammas, and the third is Samhain). During late September and early October, farmers harvest their grain crops and prepare for the approaching winter chill. This is a great time to “harvest” what you’ve been working on, growing, and manifesting during spring and summer, and to start making preparations for the months ahead.

Mythology of the Autumn Equinox

The Autumn Equinox symbolizes the transition from life to death, with the knowledge that life will return at the Vernal Equinox (March 20, 2022). Mythology from many traditions recognizes this shift in energetic forces.

The Greek goddess of grain and crops is Demeter (Roman Ceres). According to myth, Demeter had a daughter Persephone, who was kidnapped by Hades to be his bride in the underworld. During the winter months, Persephone had to stay in the underworld, but she could return to her mother on Earth during spring and summer. Pomegranates are a symbol of Persephone’s time with Hades and are associated with the equinox.

Demeter was heartbroken at the loss of her daughter, and in her grief she made the world dark and cold, so that the crops couldn’t grow during winter. This is the Greek explanation for the changing seasons. Although Demeter feels grief during fall and winter, she knows that Persephone will return and can be grateful for the time she has with her on Earth. We can remember the story of Demeter and Persephone to help get us through those winter blues. The days may be dark and cold, but we know that spring is always just around the corner.

This myth resembles the journey of the Sumerian goddess Inanna, who ruled fertility and abundance. She is killed by her sister Ereshkigal and must journey to the underworld. During her absence, the land becomes infertile and bare.

In the Wiccan tradition, the Oak King and the Holly King are two aspects of the Divine Masculine known as the Horned God. Throughout the year, these two powerful forces battle with each other for supremacy in the natural world. At midsummer (Litha), the Oak King is at the height of his power. At the Autumn Equinox, the Holly King defeats the Oak King, who dies until he’s reborn in Spring. This battle, like the Demeter and Persephone story, is a tale of life, death, and the promise of rebirth.

Wiccans call the Autumn Equinox “Mabon,” after the Welsh hero Mabon ap Modron, a companion of King Arthur’s knights who was stolen from his mother as a baby. Mabon ap Modron’s story and the story of Demeter and Persephone both center around a mother’s grief and the joy she feels when her child is returned to her.

How to Celebrate the Autumn Equinox 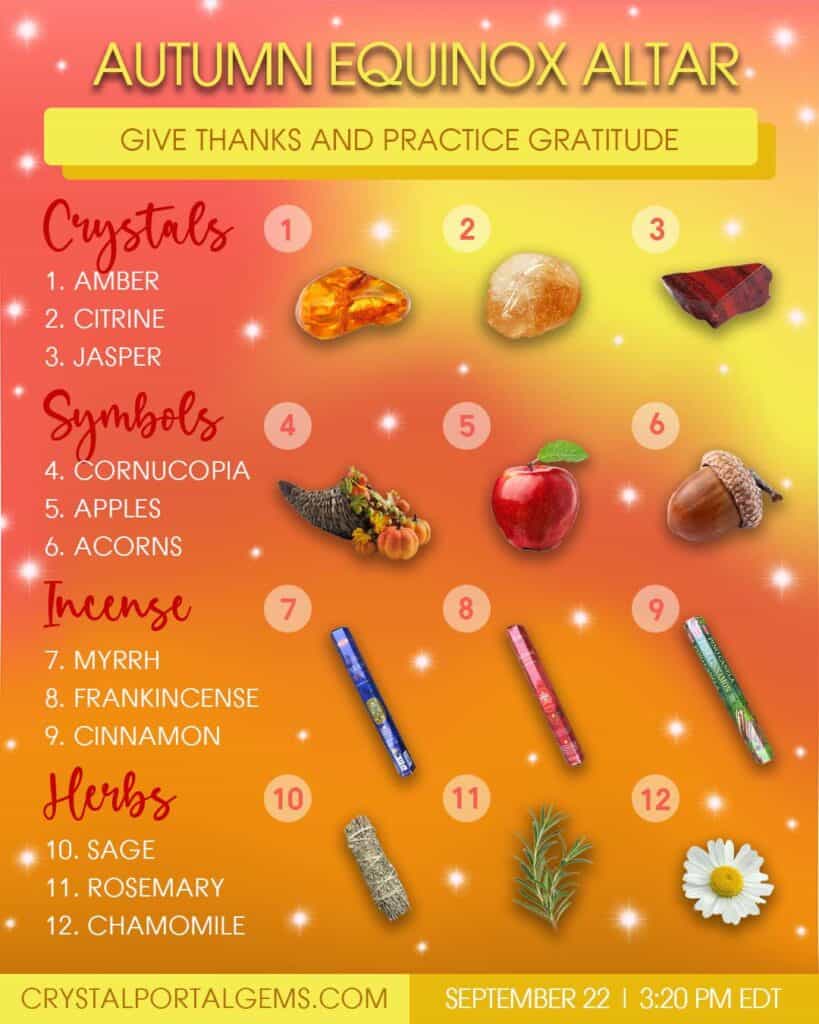 As the days grow shorter and cooler, I am grateful for the bountiful harvest which is a result of my hard work. I am well-prepared for the restful winter ahead.

Celebrate the harvest with this simple apple recipe. Easy to multiply and perfect to pack for an Equinox picnic.

Tip: To make this recipe vegan, substitute margarine for butter.

Tip: Try serving it warm with a scoop of vanilla bean ice cream 😋 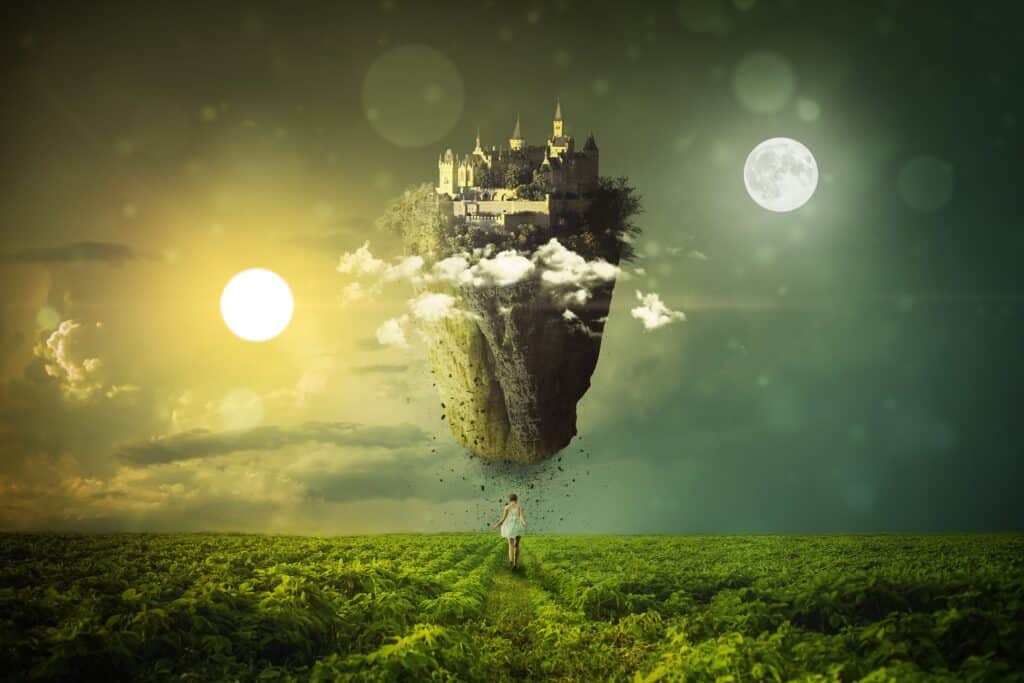 Cleanse your space by burning cedar. Cedar clears out negative energies and makes space for positive intentions. In addition to clearing, cedar is great for balancing energies. As you prepare your space, visualize any energetic imbalances fading away.

Prepare an altar for your candles to rest on, if you don’t already have one. You can also do this ritual at your Autumn Equinox altar if you have one set up. Place your candles at an equal distance from the center of your sacred space, with the black candle on the left side and the white candle on the right side.

Find a comfortable seated position. You may choose to sit cross-legged, in a chair, or however feels best to you. Take a few deep breaths and begin to feel your energy relax.

To ground: visualize a white light glowing in your body, either at your root chakra or, if sitting in a chair, at the bottoms of your feet. You may feel a tingling sensation. Now, imagine the light extending downward into the earth. It passes through the floors into the ground, through layers of soil and rock. Eventually, this light touches the very core of the Earth. Feel the energetic connection flowing from the Earth into your body at your chosen point. Now, visualize the white light extending through your whole body. You are grounded. The Earth’s energy is flowing through you.

To center: once you’ve grounded yourself and feel connected to the Earth, visualize the white light contracting until it’s at the center of your body.

Take the two unlit candles in your hands, the black candle in your left hand and the white candle in your right. These colors represent the union and balance of opposites. Black represents the Yin feminine energy, while white represents the masculine Yang. Visualize the white light emanating from the center of your body, down your arms, and through your hands into the candles. Speak your intention out loud: “My energy is balanced. Light and dark, masculine and feminine, day and night are in perfect alignment.” Place the candles back on your altar and light them.

Take your hematite stones, one in each hand. Keep your hands open with your palms up. Begin to breathe deeply. Count your breaths: inhale for two counts, exhale for two counts. In numerology, the number 2 represents the balancing of opposing forces. As you breathe, begin to feel a steady flow of energy between the two hematite stones. You can stay here as long as you need to feel fully balanced.

You can choose to let the candles burn down completely (this will take close to a week), if you’re able to do so safely. Otherwise, once your ritual is complete, extinguish the candles and place the hematite stones in front of them on your altar. You can light the candles any time you want to stabilize your energy. You can also choose to carry the hematite stones with you, one in each pocket, to bring stability wherever you are.

Tip: You can choose crystals for specific things you want to bring balance to. Hematite is great for an overall energetic balance. If you want to balance your emotions, try using Amazonite instead, and if you’re looking to balance masculine and feminine energies, we recommend Shiva Lingam or Tiger’s Eye.

Find us on Social Media

Join our newsletter for updates on happenings at the Portal, sales, astrological insights, and more.

Join our newsletter for updates on upcoming events, sales, and a special moon ritual.

Only sent on the New Moon & Full Moon.

Stay up to date on the next astrological event

Only sent on the New Moon & Full Moon